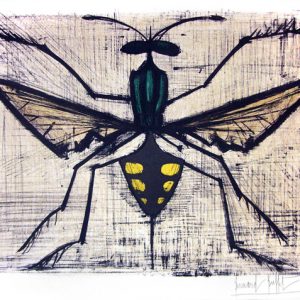 The Wasp by Bernard Buffet 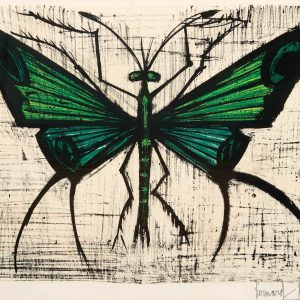 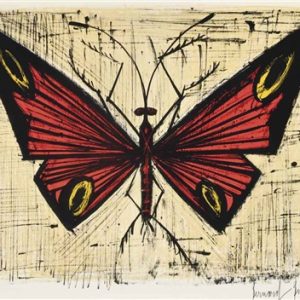 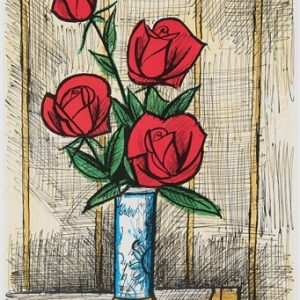 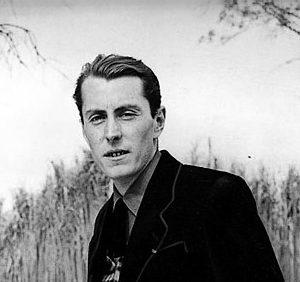 Embodying Jean-Paul Sartre’s Existentialism and Albert Camus’s Absurdism, Bernard Buffet’s painting conveyed the anxiety that permeated France during the Nazi occupation and came to dominate the post-war figurative art scene. A member of a group called L’Homme Témoin (The Witness) along with Bernard Lorjout and André Minaux, Buffet developed a realist style infused with social criticism, featuring a restrained palette and black outlines. He is best known for his grim “Horror of War” series and myriad streetscapes and interior scenes populated by angular, emotionless figures. Self-portraits, religious scenes, still lifes also figure among his oeuvre, which extends to lithography, engraving, and sculpture. Buffet continued to enjoy success as a commercial artist until a debilitating illness prompted him to commit suicide.

Bernard Buffet was born in Paris in 1928. At the age of fifteen, he entered the Fine Arts school and followed Narbonne’s lessons who encouraged him to find himself. Therefore, he left school and devoted himself to his art, at his father’s house. In 1946, he exhibited his first canvas, a self-portrait, at the Salon des moins de 30 ans. One year later, he was introduced at the Salon des Indépendants and then Pierre Descargues organized his first personal exhibition.
The National Museum of Modern Art bought him a canvas, Nature morte au poulet. He didn’t win the young painting award at the gallery Drouant-David but got remarked by the doctor Girardin, a collector who pushed Emmanuel David to offer him a contract shared later with Maurice Garnier.  In 1947, Buffet really asserted his style and success followed : considered as a « miserabilist » painter, in line with Rouault or Gruber, he painted torn, skinny figures, still lifes in an aggressive, immediately recognizable realism within large thematic series.
The art of Buffet, described as « existentialist », reaches the collective unconscious in its most dreadful aspect, and encourages us to see inhumanity in every thing and every being. The line is drawn with charcoal then incised in black. Colours are rare, Buffet mainly worked in grey and « muted» tones.
He exhibited at the gallery Saint-Placide and won the Critic Award with Bernard Lorjou and then at the Salon d’Automne.
In 1956, he settled in Aix-en-Provence where he remained until 1964. He married Annabel Schwobb in 1958, the year the gallery Carpenter dedicated him a retrospective with a huge success. In 1961, he painted for the Chapel of Château l’Arc various scenes of the life of Christ. Ten years later, the secretary of the Pope Paul VI would order him a series of canvas exhibited in a special room in the Vatican Museum.
Besides numerous books dedicated to Bernard Buffet, his work travels worldwide, as in Japan, where a museum is dedicated to him. Buffet finally settled in Tourtour (Haut-Var) in 1986 where he died in 1999.
Made Chevalier of the Legion of Honour in 1971, elected at the Academy of Arts in 1974, Buffet remains an essential witness of our time.