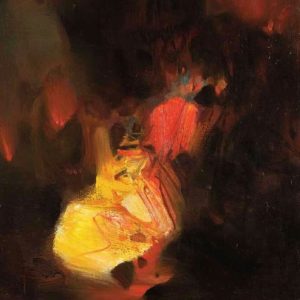 Chu Teh Chun was born in 1920 in Jiangsu Province, China. In 1935 Admitted to Hangzhou Academic Art College .He was first interested in the traditional style, and then he opted for western painting. In 1954 he did his first solo exhibition at Zhongshan Hall in Taipei.

In 1956 he attended Paris Spring Salon, won Silver Prize. In 1964 he was invited to attend “International Modern graphic exposition” held by the Carnagy Museum in Pittsburg, USA. In 1987 Retrospective exhibition of Chu Teh-chun’s art work in the state-run historical museum, Modern France paintings exhibition held in the capital city hall of Israel.His art of painting has brought about new invention of writing between poetry and painting. The artist seems to open a new chapter in the area of landscape art, landscapes that are mixed with subtle poetry. He makes important graphic works, drawing, ceramics, large scale paintings, diptychs, triptychs, monumental works, always inventing a personal writing style between poetry and painting. In 1987, the National Museum of Taipei organized a grand retrospective of his art work. In 1997, he is elected to the Academy of Fine Arts of the Institute of Paris.