She screamed for ice-cream every day by GM

He screamed for ice-cream every day by GM

She had butterflies in his heart by GM

He had butterflies in his heart by GM

She gave her heart to her one love by GM

He gave his heart to his one love by GM 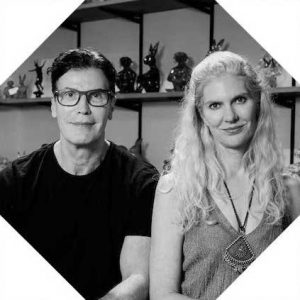 Gillie and Marc have been called “the most successful and prolific creators of public art in New York’s History” by the New York Times. Creating some of the world’s most innovative public sculptures, Gillie and Marc are re-defining what public art should be, spreading messages of love, equality, and conservation around the world. Their highly coveted sculptures and paintings can be seen in art galleries and public sites in over 250 cities. They’re Archibald Prize Finalists, were awarded the Chianciano Biennale in Italy, won People’s Choice Award in Sydney’s Sculpture by the Sea 2 years in a row, and have earned other notable awards and accolades.