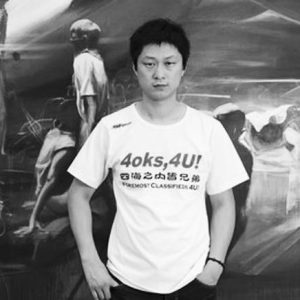 Born in 1979 in Liaoning Province (China) and a graduate of the Luxun Academy of Fine Arts, Jia Ai’li lives and works in Beijing.

Jia Aili is representative of one of the most vibrant painting traditions in contemporary Asia but yet as part of a post 80s generation, his language is unique. A product of the one-child policy introduced in 1978, Jia, who was born in 1979, expresses the sentiments and attitudes of his generation: Growing up in the ‘new’ China, although knowing no economic hardship and having no political baggage yet feeling isolated and alone as they enter adulthood.

Often with a greyish and bluish hue, the artist’s works are known for presenting a world in which solemnity and violence co-exist, a world on the brink of collapse. His is a solemn and romantic detour, in contrasts with a Chinese art world which is, to a varying extent, clamorous and unsteady. Using pictorial language the public is well acquainted with to depict space and canvas elements, and to arouse courage and the visual appeal, his works energize the senses of the soul, which are indescribable but are the essence of oriental aesthetics we have come to appreciate.