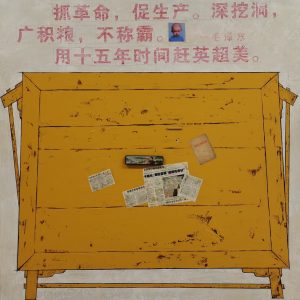 Quotations from Chairman Mao Zedong no.2 by Liu Gang 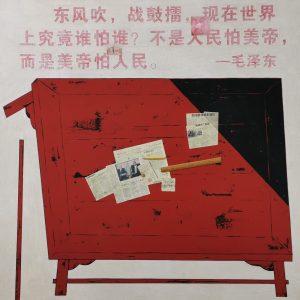 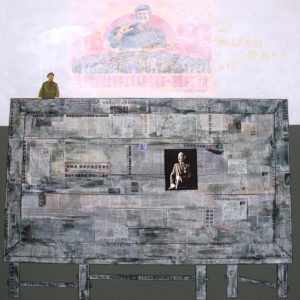 Bigcharacter Poster no.1 by Liu Gang 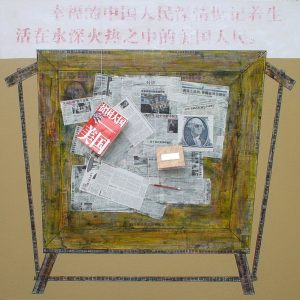 A Pair of Tiger Toys by Liu Gang

The Story of Revolution by Liu Gang

A Sealed Book by Liu Gang

The Red Sun by Liu Gang

Real Context of ‘FACE TO FACE’ By: Yiyi

Nowadays, computer applications have become almost an essential part of the life. The open window, Desk, which opens the virtual world to us, has become a symbol of carrying the web information in our time.

Artist Mr. Liu Gang’s series of “face to face” present the unique “Desk” under the true context for us. His “Desk” has a very strong narrative and documentary. Through his rich imagination, easy way and multi- dimensional perspective, the artist puts the memory fragments and the real life with current affairs together, which constitute the focus of the problem with the stage effect, and finally this kind of formation become his unique speculative expression.

In the series of “face to face”, from “flowering as the background” to “Memory “, to the recent one “Focus”, Liu Gang puts causes and consequences of evolution of all the things on the table with his characteristic art forms. And then he invited the viewer to be involved in the work, to realize that he chooses the real events on the true time dimension. And viewers will be surprised to find a combination of various elements. Such as “Focus” of Face to Face —–Missing, which based on the current affairs: this was the unhappy birthday of Obama because of the U.S. debt. As a “well-being” Chinese people deeply misses Americans, who is living in dire straits (Slogan from Chinese Great Leap Forward period). Artist attached his own handmade musical birthday card to Mr. Obama on the table. Moreover the directly communication of “Face to Face” shows more concept of his art work that he pays more attention on current affairs and past political things. This time, he uses the concept of installation, to put the real book in his work, which has broken the shackles of painting. Now two-dimensional interpretation of the work became the three- dimensional installation.

The series of Face to Face of Liu Gang is not only historical, but also immediate. In the work of “Exceed both of U.K. and U.S.”, theartistclippeddownthecurrentnewsonthetable, pastedthe slogan of 1958 as the background, which make the real affair match the historical time dimension, in addition, added the pencil box in 1960s and the Brochure of resisting U.S to help Korea onto the painting. Again the artist let the viewers to reread and understand the cultural elements under his designed real context.

The series of “Face to Face” is open and hidden astringent as well. The artist put all the information, which maybe we can see or we cannot see on the table. And he reconstructed the all kind of elements, to make the new stories after the elements contacting each other. The work of “The little pig—Hua Hua” of the series of Focus of Face to Face is full of humor. Cartoon characters and pigs on the desktop can be mapped many social phenomena. However, the artist re-mixes the slogan in 1960s into the work, which leads the audience to rethink the current political affairs freely.

After reading the works of Liu Gang, which have been carefully picked up the related elements and it seems to have some original relevance inside. W e can not help to cool down and to repeatedly refine the real context seriously