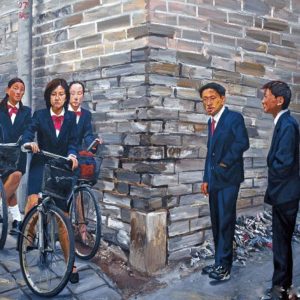 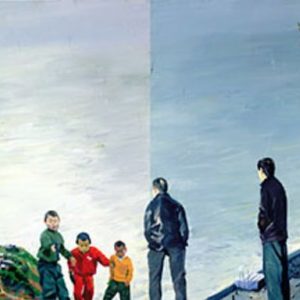 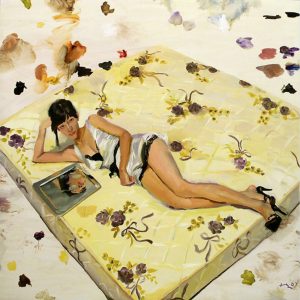 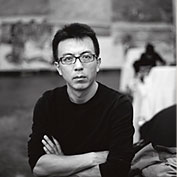 Born 1963 in Liaoning Province, China
Lives and works in Beijing, China
Liu Xiaodong is regarded as one of China’s finest painters. His canvases are known for having rich colors, strong brush strokes, unusual framing (including cut off heads and limbs) and near perfect technique. Many of his portraits are drawn from snapshots of friends or family members, doing ordinary things, like eating, laughing or playing games. An early, defining moment for Liu was when he was given a picture of a Lucien Freud painting. Intrigued by Freud’s ability to capture a person’s inner power, Liu decided to concentrate on figurative painting. In 1993, he and his wife, also a painter, played themselves in a friend’s “neo-realist” film, and Liu was attracted to neo-realism’s focus on common people rather than on metaphysical shapes and ideas. In later years, Liu has put aside his earlier emphasis on meticulously chosen scenery and composition with careful brushwork, and instead he began to try to paint more boldly and spontaneously.

Liu Xiaodong studied at the Central Academy of Fine Arts in Beijing and received a Bachelor of Fine Arts in oil painting in 1988. In 1995 he was awarded a Masters of Fine Art in oil painting at the same university. From 1998 he continued his studies overseas at the Academy of Fine Arts at the Madrid Complutense University in Spain. At the moment he teaches at the Central Academy of Fine Arts, Beijing, China.
Liu Xiaodong held his recent solo shows at Ullens Center for Contemporary Art, Beijing, China, “Hometown Boy” (2010); at TimeZone8, Beijing, China, “The Richness of Life: The Personal Photographs of Contemporary Chinese Artist Liu Xiaodong 1984-2006” (2007);, Guangdong Art Museum, Guangzhou, China, “Liu Xiaodong: Painting from Life” (2006); Asian Art Museum, San Francisco, California, “The Three Gorges Project – Painting by Liu Xiaodong” (2006). He was also part at important group exhibitions of Chinese Contemporary Art, for example “Fresh Ink: Ten Takes on Chinese Tradition”, Museum of Fine Arts, Boston, Massachusetts (2010), “The Three Gorges Dam and Contemporary Chinese Art”, Museum of the Art Institute of Chicago, Chicago, Illinois (2009), “Made in China”, Louisiana Museum for Moderna Kunst, Humlebæk, Denmark (2007).

Made in China, Louisiana Museum for Moderna Kunst, Humlebæk, Denmark.