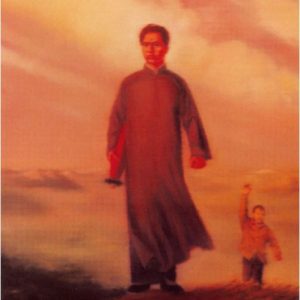 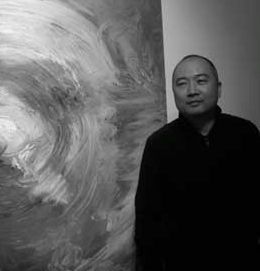 Born in 1970 in Henan Province, Yin Zhaoyang is a painter associated with the generation that followed the performance- and installation-oriented works of such artists as Zhang Huan and Xu Bing. Studying at the Central Academy of Fine Arts in Beijing, Yin developed an esthetic he calls a “collage of ideals”–a preference for powerful imagery based on such iconic presences as Mao, Tiananmen Square, and China’s flag. Yin Zhaoyang’s work, while squarely situated within the context of contemporary Chinese painting, directly references the western tradition of the 1960’s and 1970’s – calling to mind the work of Gerhard Richter and Andy Warhol among others. Unlike the genre of political pop, gaudy art, or kitsch, within which the image of Mao is so often positioned, Yin Zhaoyang presents these powerful images within an atmosphere of memory and ambiguous reflection. Working from photographs of the living Mao, both official and unofficial, as well as from images of monuments erected in his honor, Yin Zhaoyang explores the distanced relevance of Mao Zedong to a society that has largely repudiated the policies of the Great Leap forward and the Cultural Revolution.

Among the “post-70s” artists, Yin Zhaoyang pioneered the artistic exploration on the subject of youthful sadness and began for the first time to project the self-imagery and emotional features of this generation onto the canvas. By situating grand narratives in humanistic concerns and reflection, his paintings offer a sentimental epitome of the plight suffered by youth of a particular era. In the 1990s, “Youth Cruelty” paintings by artists represented by Yin Zhaoyang, among others, have added to this category an experimental dimension and enhanced its depth of thinking in terms of narrativity, concept of image and aesthetic taste, constituting a major tendency in avant-garde painting of a decade.
Solo Exhibitions: