Last year, an artwork by Jean-Michel Basquiat sold for a record $110.5 million (£85m) at auction in New York.

Sotheby’s said the sale of “Untitled” on a Thursday night in Manhattan was an auction record for the artist. It also set a record price for an American artist at auction. The 1982 painting depicts a face in the shape of a skull.

The piece was purchased by noted Japanese collector and entrepreneur Yusaku Maezawa after a 10-minute bidding war. He says he plans to eventually display the painting in his museum in Chiba, Japan.

How did a young graffiti rebel go from selling drawings for $50 in 1980 to having a painting come up for auction at a staggering $60 million?

In the spring of 1982, a rumour started swilling around New York. A gallerist had some kind of boy genius locked in her basement, a black kid, wild and inscrutable as Kasper Hauser, making masterpieces out of nowhere to the accompaniment of Ravel’s Boléro. “Oh Christ”,  Jean-Michel Basquiat said when he heard. “If I was white, they would just call it an artist-in-residence.”

These were the kind of rumours he had to work against, but also the deliberate myth he constructed about himself, part canny bid for stardom, part protective veil. Basquiat was 22 by then, and could make up out of the whole cloth of his childhood experience all kinds of patchworked, piecemeal selves, playing off people’s expectations of what a grubby, dreadlocked, half-Haitian, half-Puerto Rican young man might be capable of.

He had come to prominence as a graffiti artist, part of the art duo SAMO, short for same old shit, who bombed the doors and walls of the Lower East Side with enigmatic phrases. The paintings started coming right at the moment that the East Village transformed from a burned-out wasteland inhabited by heroin addicts to the epicentre of a startling art boom. There was a marketable glamour to being a down-and-out prodigy then, but it was an act for Basquiat, as much a way of satirising prejudice as the African chieftain outfits he’d later wear to the parties of wealthy white collectors.

He was a street kid, true, a teen runaway who had slept on benches in Tompkins Square Park, but he was also a handsome privileged boy from a Park Slope brownstone who had gone to private school, followed by a stint at City-As-School, a destination for gifted children. Though he didn’t have a formal art education, he and his mother Matilde had been frequenting museums since he was a toddler. As his girlfriend Suzanne Mallouk recalled of a trip to MOMA, “Jean knew every inch of that museum, every painting, every room. I was astonished at his knowledge and intelligence and at how twisted and unexpected his observations could be.” 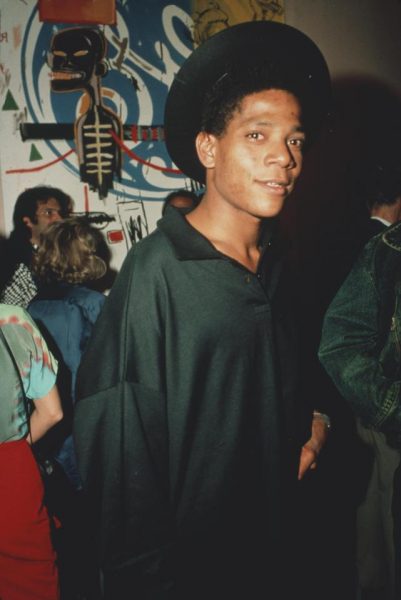 All the same, there were ruptures. His parents separated when he was eight. That year, a car hit him while he was playing basketball in the street. He spent a month in hospital with a broken arm and internal injuries so severe his spleen had to be removed. The gift his mother gave him then, a copy of Gray’s Anatomy, became his foundational text, his talisman. He loved discovering the interior architecture of his body, but he also loved the way a body could be reduced to the clean lines of its component parts. Later he would be similarly drawn to cave art, hieroglyphs and hobo signs, the world resolved into elegant pictorial symbols that encoded complex meanings.

As a boy he made cartoons of Hitchcock films, but in 1977 he graduated to making his mark on the skin of New York itself. A bebop insurgent, he travelled the nocturnal city with a spray-can in his overcoat pocket, attacking in particular the high art zone of Soho and the Lower East Side. “ORIGIN OF COTTON,” he wrote on a wall in front of a factory in his distinctively loose-jointed capitals; “SAMO AS AN ALTERNATIVE TO PLASTIC FOOD STANDS”. The statements were so totally poised in their assault on art-world inanities that observers believed they were by a disaffected conceptual artist, someone already famous. “SAMO FOR THE SO-CALLED AVANT GARDE; SAMO AS AN END TO THE POLICE”.

There is a graphomaniac quality to almost all of Basquiat’s work. He liked to scribble, to amend, to footnote, to second-guess and to correct himself. Words jumped out at him, from the back of cereal boxes or subway ads, and he stayed alert to their subversive properties, their double and hidden meaning. His notebooks, recently published in an exquisite facsimile by Princeton, are full of stray phrases, odd combinations. When he began painting, working up to it by way of hand-coloured collaged postcards, it was objects he went for first, drawing and writing on refrigerators, clothes, cabinets and doors, regardless of whether they belonged to him or not.

In 1980, a boom year, he was mostly homeless and penniless, picking up girls from clubs so he had somewhere to spend the night. He showed his work for the first time in the scene-defining Times Square Show, which also featured Kenny Scharf, Jenny Holzer and Kiki Smith. He starred as the lead character in New York Beat Movie, a film based loosely on his life, which wouldn’t be released until 2000, when it was renamed Downtown 81. That year his co-star Debbie Harry bought one of his first paintings, Cadillac Moon, for $100, less than one millionth of the price reached by one of his works these days. 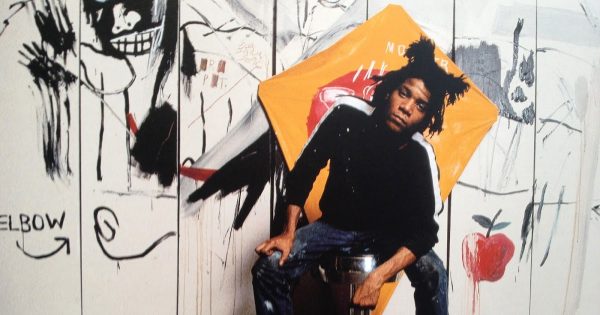 It’s salutary to look at Cadillac Moon, with its Twomblyish neutrals, its scumbled regions of accomplished and obscuring white and grey, behind which are visible ranks of capital “As”, spelling out a lexical scream, alongside cartoon cars and TV sets. At the bottom there is a sequence of names, from left to right a crossed-out SAMO, followed by AARON, a name Basquiat often incorporated into his paintings, probably after the baseball player Hank Aaron, and then his own bold signature.

There it is: the mature elements of Basquiat’s work, worldly, reticent, communicative, crude and expert all at once. In palette and simplicity it’s a visual rhyme to the very late Riding with Death, painted in the heroin wasteland of 1988, Basquiat’s last year, in which a black man rides on a four-legged white skeleton, against an awesomely reduced background, a burlap-coloured scrim, of absolutely nothing at all.

These were words he used often, names he returned to turning language into a spell to repel ghosts. The evident use of codes and symbols inspires a sort of interpretation-mania on the part of curators. But surely part of the point of the crossed-out lines and erasing hurricanes of colour is that Basquiat is attesting to the mutability of language, the way it twists and turns according to the power status of the speaker. Crimée is not the same as criminal, negro alters in different mouths, cotton might stand literally for slavery but also for fixed hierarchies of meaning and the way people get caged inside them.

“Everything he did was an attack on racism and I loved him for this,” Mallouk says in Widow Basquiat, the poetic account of their shared life by Jennifer Clement. She describes him in MoMA sprinkling water from a bottle, hexing the temple. “This is another of the white man’s plantations,” he explains.

After Basquiat, Mallouk became involved with another young artist, Michael Stewart, who in 1983 was arrested and beaten into a coma by three police officers after graffitiing a subway station wall. He died 13 days later. The officers, who claimed Stewart had a heart attack, were charged with criminally negligent homicide, assault and perjury but found not guilty by an all-white jury. It is thought he was killed by an illegal chokehold, as Eric Garner would be, in New York, 31 years later.

“It could have been me,” Basquiat said, and set about painting Defacement (The Death of Michael Stewart). Two cartoonish cops with malevolent Mr Punch faces and raised nightsticks wait to rain blows on a black boy, who Basquiat has drawn as a faceless silhouette, passing between them into the blue sky.

All the time, Basquiat was becoming more successful, more wealthy and famous. And yet he still couldn’t reliably hail a cab in the street. Fine: limos instead. He bought expensive wines, Armani suits to paint in, like any artist who has suddenly made it big, yet the anecdotes about his spending were passed on with a casual glaze of racism, as if there was something unusually revealing about his appetites. 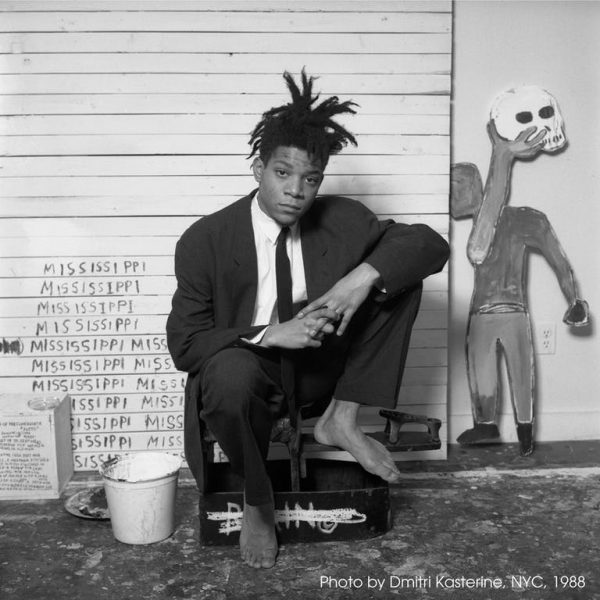 It was lonely, he was lonely, the only black man in the room, his prodigy status like that of a toy. “They’re just racist, most of those people,” he’s quoted as saying in Dieter Buchhart’s Now’s the Time (Prestel). “So they have this image of me: wild man running – you know, wild monkey man, whatever the fuck they think.”
One of his closest friends in the years of his success was Andy Warhol. The first time Warhol mentioned Basquiat in his diary, on 4 October 1982, was as “one of those kids who drive me crazy”. It didn’t take long, though, before they were embroiled in a full-blown friend-romance, among the most intimate and lasting of both their lives. They collaborated on more than 140 paintings, worked out and went to parties, had manicures and talked on the phone for hours. Those who believe Warhol incapable of tenderness might take a look at his diary, as he frets endlessly over Basquiat’s gargantuan drug consumption, the way he nods out on the Factory floor, falling asleep as he ties his shoes.

There was nothing heroic or glamorous about Basquiat’s addiction. It came with the usual detritus: hitting girlfriends, accruing debts, falling out with beloved friends. He tried to stop but couldn’t, and in the end he died in the apartment he rented from Warhol on Great Jones Street, of acute mixed drug intoxication. In its obituary, the New York Times observed that Warhol’s death the preceding year “removed one of the few reins on Mr Basquiat’s mercurial behaviour and appetite for narcotics”. 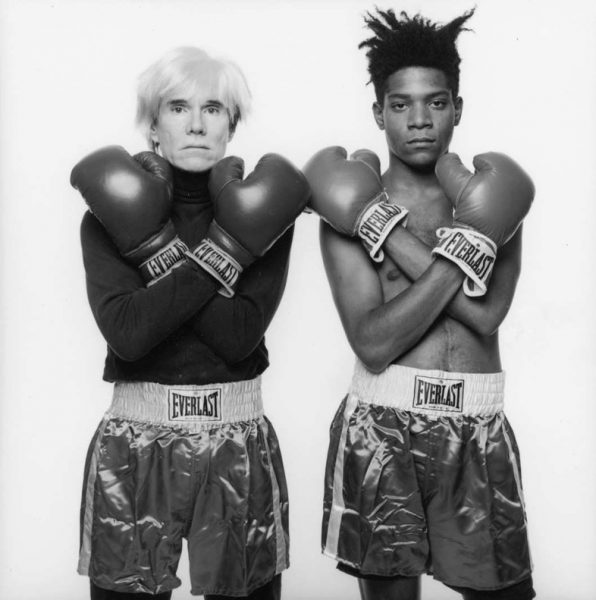 Maybe so, but in 1988, a somnolent, junk-sick, grieving last year, he assembled masterpieces, among them Eroica, with its intricate map of heroes and villains, some barely visible beneath the black and white pentimenti, the repentance marks that Basquiat made his signature.

These days Basquiat is among the most expensive artists in the world; these days his images are franchised, replicated everywhere from Urban Decay blusher pots to Reebok trainers. You could scorn the commercialisation, but isn’t it what he wanted, to colour every surface with his runes?

They are doing his spells for him and it could hardly be more necessary, since the forces that he arranged himself against are unequivocally on the rise, since white men are parading unmasked and with torches through the streets of Charlottesville and Boston, chanting “blood and soil”. 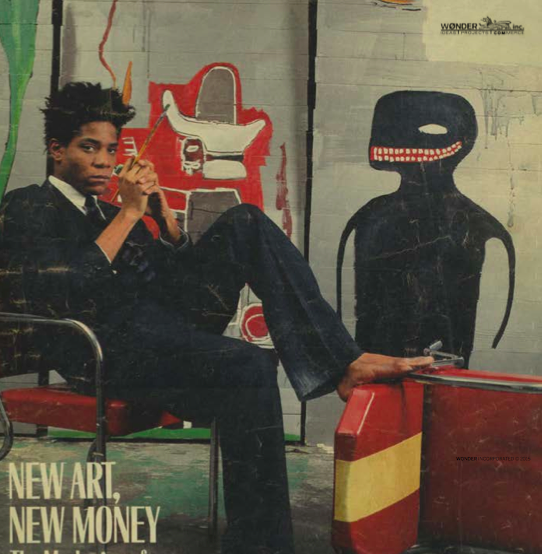 “Who do you make a painting for?” he was asked in a filmed interview in October 1985, and he was silent for a long time. “Do you make it for you?” the interviewer continued. “I think I make it for myself, but ultimately for the world you know,” Basquiat said, and the interviewer asked him if he had a picture of what that world might be. “Just any person,” he said, because he knew that change is coming all the time, from everywhere, and that if those of us who are leaning on the doors get out the way, freedom might be a possibility – boom for real.

*article extracted from The Guardian. Photos courtesy of the internet from their respective owners