Attitude no.5 by Shen Hongbiao

Attitude no.10 by Shen Hongbiao

You & Me by Shen Hongbiao

Prairie Warriors no.6 by Shen Hongbiao

Peace in Mind by Shen Hongbiao 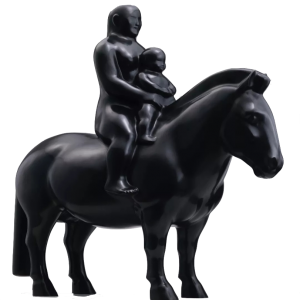 Mother and Son by Shen Hongbiao

Prairie Warriors no.4 by Shen Hongbiao

Light of Hope by Shen Hongbiao

Bull & Prosperity no.6 by Shen Hongbiao

The Strong Bull by Shen Hongbiao 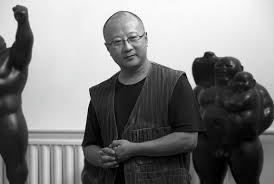 Shen Hongbiao was born in Shenyang, in China, in 1969, and studied sculpture at the Lu Xun Academy of Fine Arts. He joined Paris’s Sorbonne University following an internship at the city’s École des Beaux-Arts with Professor Abraham Pincas – a decision which was influenced by a meeting with Eliane Chiron, a professor at the Sorbonne. Following this, the artist decided to deepen his work, and took a masters course, before producing a thesis entitled “The Poetry of Shock in Contemporary Chinese Sculpture”.

Shen Hongbiao tries to represent an interior force in his sculptures. The materials which he employ in these works are often very hard – like steel , iron, bronze and stone. The interior force of the sculpture is soft, like water. It extends up to the exterior, whilst the force of the exterior pushes inward: the two forces press against one another. His art acts as a witness to the artist’s inner core and life.
There are two sources of inspiration for Shen Hongbiao’s art. One is the cultures of the Han Dynasty (206 BC – 220 AD) and the Wei Dynasty (386 – 550 AD). He consult a lot of examples of works in this field – such as the brick reliefs of Hua Xiang Zhuan or those in stone by Hua Xiang Shi, which date from the Han Dynasty (Hua Xiang Zhuan). Han and Wei were two glorious eras, marked by a sense of artistic freedom following the rigorous nature of practice during the Qin dynasty (221 BC – 207 AD).
The second influence lies in the landscape of Mongolia, where the artist came from, and the customs of its inhabitants: for example, horse riding, wrestling and archery. He spent years in Steppes, and the nature there makes him feel at ease. Between the sky and Steppes, there is nothing but oneself. The artist’s experience in France has enabled him to find a language for his art. When he was in Europe, Shen Hongbiao rediscovered the essence of Asian culture – it’s also because of this that he used a lot of Asian languages during his studies.
Shen Hongbiao mentioned his works are better adapted to large, rather than small spaces. The bigger an area is, the greater the force of his sculptures – something which is a recurrent characterstic of his artistic practice.
1969：Born in Shenyang City
1993：Graduated from the Sculpture Department of Luxun Academy of Fine Arts with Bachelor’s degree；
2001：Graduated from the Universite de Paris I-Pantheon Sorbonne with the master’s degree of formative arts；
2007：Graduated from the Universite de Paris I-Pantheon Sorbonne with the doctor’s degree of formative arts；
Now: Professor of Sculpture Department of China Central Academy of Fine Arts；Member of The Formative Arts Association Of UNESCO；Member of International Association Of Mongolian Hummei.